As a highly acclaimed photographer Rhian is today well established in the photographic industry.

Rhian’s passion for photography began in the late 80’s leading her to travel to Bangkok to document the lives of street children, working with the street teachers at Bangkok’s main railway station.

This was then followed by further reportage projects including one of the lives of blind children in Penang Malaysia.

Her natural gift and ability to communicate and work with children shows in her personal work as well as her recent editorial commissions… Her private work with children led her then on to working with numerous charities such as Comic Relief where she worked with child soldiers in Sierra Leone and aids orphans in Zambia.

Rhian has traveled extensively with her work and now focuses the majority of it here in the UK as a portrait/reportage photographer. Working both in digital and film from studio to location. 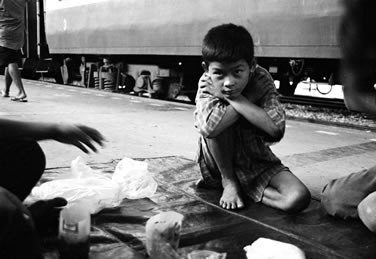